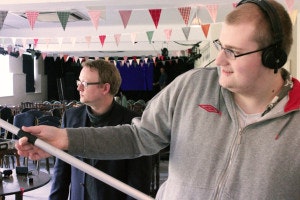 Movies in the Moorlands

In 2013-14, we embarked on an exciting new film project, for local young people. Entitled ‘Movies in the Moorlands’ the project was aimed at young people in the Staffordshire Moorlands. It saw participants working with professional film makers to write, produce and market their own short film. The project started in September 2013 and will culminate in a local premiere of the film that the young people have made.

Funded by Big Lottery Fund and Staffordshire County Council, our film makers delivered creative workshops with the young participants, who learnt all aspects of film making, from coming up with the initial screenplay idea, through to writing, casting, filming, editing and marketing their film. Two short films were created by the group: “When Nerdz Attack”, a short comedy film written and directed by Ben Chamberlain and Niall Edwards and “The Clock”, written by Danny Butcher-Graham and directed by Brendon Hargreaves, and cast and produced by the whole team.

“The aim of this project is to engage local young people who may not normally be able to access such a project… it’s all about seeing how we can inspire the young people to voice their ideas and opinions through film making, whilst giving them transferable skills for the future” – Lynne Payne, Producer

“I’ve always been looking for a project like this that educates and gives experience but doesn’t have the restrictions of school. Looking forward to seeing what we can put together” Brendon – participant.

The Big Lottery Fund distributes half of the National Lottery good cause funding across the UK.  The Fund aims to enable others to make real improvements to communities and the lives of people most in need.