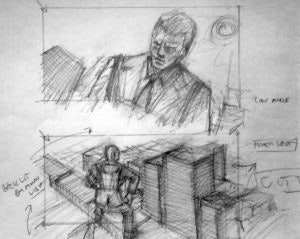 #HowNotToWorkMovie has been travelling its way around the World film market, via our sales agent Adler and Associates Entertainment and has now hit video on demand. Available now on Amazon Prime and iflix!

But alongside that, we’ve begun the development phase of Patrick’s next screenplay, The Unprofessional. It’s Leon meets Midnight Run with a dash of Fear and Loathing in Las Vegas.

Gabriel is a fucked-up, hallucinating assassin; the result of a military experiment gone wrong. He has one last job, then he has to run.

“THE UNPROFESSIONAL takes a unique look at hired killings by establishing a refreshing code of honor. The script is strikingly uncluttered; it’s just one man trying to complete a job without getting killed.

Gabriel is also different from the action norm. He does everything on a whim, with no grand plans or opinions. He is an engaging central figure to watch – if only because he is so malleable, it is impossible to guess what he’ll do next.

The genre itself is a curious blend of action, comedy and road movie that could please critical audiences – there are plenty of bloody shootouts, but these moments are always juxtaposed with long stretches of conversation on the open road.” – The Blacklist